Easter in Greece. A true spectacle! 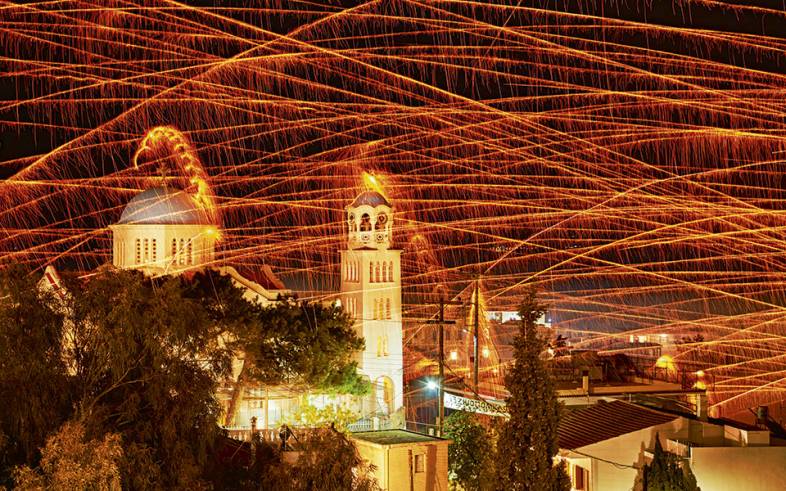 The greatest celebration of Christianity is approaching. Easter is celebrated in a unique way all over Greece, as the customs of each region revive. In the heart of Spring, these days are the perfect opportunity for a trip to the most famous destinations with special celebrations.

The getaway on the beautiful island of Chios is connected with the well-known warfare at Vrontados on the evening of the Holy Saturday between the parishioners of St. Mark and Virgin Mary Erethiani. The custom has its roots back to the Ottoman domination. Thousands of improvised rockets are being prepared right after Easter to be ready for next year. When they are launched into the sky they create a spectacular sight.

Easter in Corfu is considered one of the most famous in Greece. It is a unique experience you should not miss. With the first Resurrection at 12 o'clock on the Holy Saturday, the bells of the churches hit and the inhabitants of Corfu fly hundreds of huge clay pots of water, called Botides, from the balconies. The balconies are decorated with red carpets which is the color of the island. The custom has come from an Evangelical quotation and it is an influence of the Venetians who used to fly old objects out of their windows, in order to get new ones, in the New year.

In a very cozy atmosphere on the night of the Resurrection in Leonidio, the Arcadian sky is filled with thousands of illuminated balloons! The five parishes of the beautiful town compete for who will fly most balloons. Α spectacular view. You can combine your visit during the holy days, with short excursions to the beautiful seashore Poulithra and to Kounoupia, the lush green village of Parnonas in the dense fir forest.

Kalymnos, with its authentic and traditional character, puts anyone who visits it in the mood of the days. The island prepares for the peak of Holy Sunday several days before. Starting with buying the lamb and the whitening of houses, we arrive at the Holy Week. On Holy Friday, the epitaphs of all the parishes in the town of Pothia, are accompanied by many people. At 12 o'clock on Holy Saturday during the First Resurrection, the harbor is literally is shaken from the dropping of the dynamites, under the sounds of the church bells.

On Holy Sunday, people gather to the central square and the harbor. From there, you can enjoy the dynamic battle of the two teams that have been separated in the tops of the opposite mountains. Hundreds of dynamites fall from both sides, creating a spectacle as the day goes away. It is an event that you must definitely experience.

In Kalamata revives the custom of "Bouloukion" or else, of the shuttlewar. The custom comes from the liberation struggles of 1821 where, according to the legend, the Messenians used shuttles full of explosives to intercept the cavalry of the Turks. The shutters are cardboard tubes filled with gunpowder. The contestants wear traditional costumes and with the participation of many people gather in an open space where the shuttlewar begins.

The cosmopolitan Hydra, gives its own spotlight on Easter excursions. On Holy Friday, the epitaph of the Kamini district enters the sea as the Epitaph Hymn is read, creating a dashing atmosphere that is watched by hundreds of visitors each year. Then, the four epitaphs of the island meet in the main port. On Holy Sunday, the traditional ceremony of the Judas burn takes place. The dummy, which is filled with flammable material, is blown to the port's waterfront in a spectacular way.