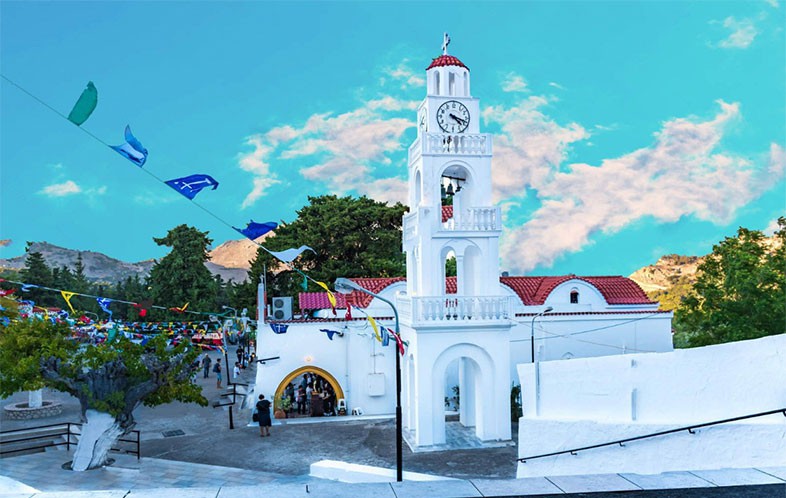 The miraculous icon of Panagia Tsambika is a symbol of faith for the inhabitants of Rhodes and beyond, especially for women who have difficulty in childbirth.

The icon of Panagia Tsambika was originally located at the Monastery of Panagia Kykkos in Cyprus. From Cyprus, in a way unknown to this day, the image was removed and was located on the mount Zamboukis of the Archangel of Rhodes. There it was revealed to a shepherd who lived opposite this point. The shepherd saw the light of the Virgin Mary but initially ignored it. Then he saw it the next night, when the third time he decided to climb the hill and see what was happening.

When he arrived he saw the icon of the Virgin Mary illuminating the "cypress air", as they call the tree that the Virgin Mary had stood. The icon took its name from this fact, since the word "Tsamba" in the local dialect of Rhodes means spark, fire.

The Cypriot monks, having spotted the icon in Rhodes, three times took her back to the monastery in Cyprus. All three times the picture left in an unknown way and returned to the point where it was found in Rhodes and today there is the monastery, on the top of the hill above the homonymous beach.

The large fields around the monastery were acquired miraculously. Τhe fields belonged to a Turkish pasha, whose wife could conceive a child. She, upon learning about the Virgin Mary, prayed and ate the candle that burned on the candle of her image. After that the woman got pregnant. Her husband could not believe that the child was his own and that it was a miracle. The legend says that when the baby was born, he held the candle pot in his hand. The Turkish pasha donated to the church all the fields around the temple.